“Queen Elizabeth would not allow the boiling of woad within 5 miles of a palace.  Fact!” – our septuagenarian, barbour-and-wellie-wearing tour guide at the Chelsea Physic Garden.

For more facts, visit the place.  It’s worth your time, I promise.

Last weekend was spent in the posher bit of SW – Sam and I wandered up to Chelsea from his house in Battersea.

There is a new, actual marketing scheme in which realtors are listing him as living in “Chelsea South.”  Ways in which Battersea resembles Chelsea: it’s near a river; more terriers than average.  Ways in which it doesn’t: real humans live here; everything.

We had breakfast at Colbert in Sloane Square – where we could only get a reservation at 9am and eggs cost £14, because, by the laws of Chelsea, the more expensive something is the better it must be. (Although, unlike a disastrous visit to the snobby and mediocre Botanist, this time it was actually really good.  Even if it was, as they say in Northern Minnesota, real spendy.)

Full, fully caffeinated and happy we wandered down past well-dressed women, tiny dogs and expensive strollers to the Chelsea Phsyic Garden, where they are currently open early for snowdrop season.  The garden is a compact, beautiful little place, with beds divided by use – headaches, gastrointestinal, dying fabric, culinary, and my favorite – poisonous, which had precisely no protections against errant children stuffing their mouths with wood bane. 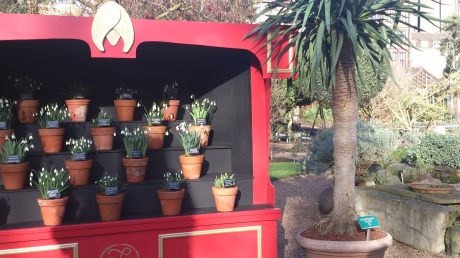 The whole thing was dreamed up by Hans Sloane (whose square we had gazed out at over £4 lattes and artisanal bacon only an hour earlier.)

Back in the 17th century, Sloane was just an upstart physician trying to make a name for himself.  He went to Jamaica (where names are made, apparently) and came back with three invaluable things for making it in Restoration London: two plants and a rich wife.

One plant, Peruvian Bark, was a source of quinine – although it wasn’t actually used to treat malaria in his lifetime as, for obscure reasons, the King didn’t like it.

Another was an apparent cure-all for stomach ailments: chocolate mixed with warm milk.  It was sold, in London, on a pretty strictly medicinal basis until the Cadbury brothers bought the formula in the 19th century.  It seems singularly unfair that I never got to live when hot chocolate and cocaine were the only medicines a girl needed.

The rich wife was the most helpful at the time, though.  It was with her money that he made his name, and gave Londoners two great ways to spend an afternoon.  The first was a collection of specimens from across the world – the founding collection of the British Museum.

The other was a training garden for apothecaries.  He bought the land in then semi-suburban Chelsea and leased it to the apothecaries (emblem below – no one had actually seen a rhino when the apothecaries – real title: The Worshipful Society of Apothecaries of London – were founded.  This was their best guess.  I want him as my best friend) in perpetuity for £5 a year.

The “rhino” atop the Apothecaries shield

Which is, this being Chelsea after all, significantly less than you’ll pay to see it.